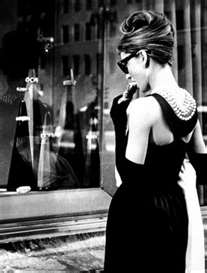 The Thyssen-Bornemisza Museum makes its first foray into the world of fashion with this retrospective dedicated to the last great master of needlework, a disciple of Balenciaga and the designer of some of the most admired women of the 20th century.
Hubert de Givenchy was the creator of the ready-to-wear concept, although perhaps his most admired design is Audrey Hepburn’s black dress in Breakfast at Tiffany’s.

Who does not remember her looking at the window of Tiffany’s?