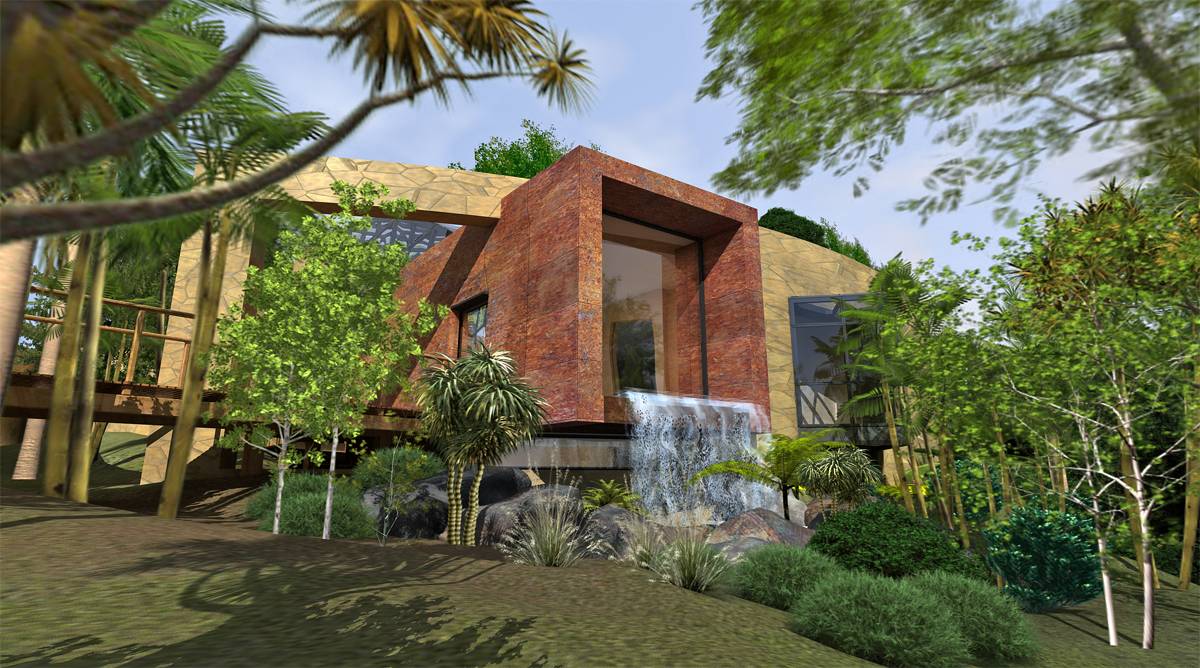 We create different areas in order to compose the different programs and treatments that a Spa should have. A main entrance where you will find the reception and shop. A corridor that divides the hydrotherapy area of the dressing rooms, leaving these on the back site so that the wet area enjoys the views to the golf course.

This corridor leads to a hall which in turn makes as waiting room and separates on one hand the thermal area of the treatment and relax area.

SPA SYNOPSIS PROJECT BY THE ARCHITECTS IN MARBELLA:

In this case, the architecture more than ever designs for the service of the senses.

Architects in Marbella focus their efforts on creating interior spaces that inspire tranquility, with a game of many dim artificial lights, curved forms, and small areas of different textures that appear in an imaginative way.

The building counts with many perfectly studied textures, facing such as to its exterior and as to the interior rooms. Stone walls that come together with finished wooden walls which add warmth to the massage rooms and floors finished with a stylish ceramic tile. In the ceilings, wood beams alternate with strategically placed lights, not to be seen and project a reflected light that contributes to create a pleasant atmosphere.

The building also has rooms where natural light takes over the artificial light, which lights up the room after being filtered through a fine fabric, filling it with color. The rooms face the golf course, to enjoy those wonderful views.

To obtain the perfect integration of the building in its environment, Architects propose a flat passable garden area, which serves as a sundeck and mimesis with the grass of the golf course. Taking advantage of the lands slope, the shape of the building and its disposition, faces the golf, making of the complex itself a beautiful lookout balcony. Water cascades slip by its facade adding another element to the composition of the building. 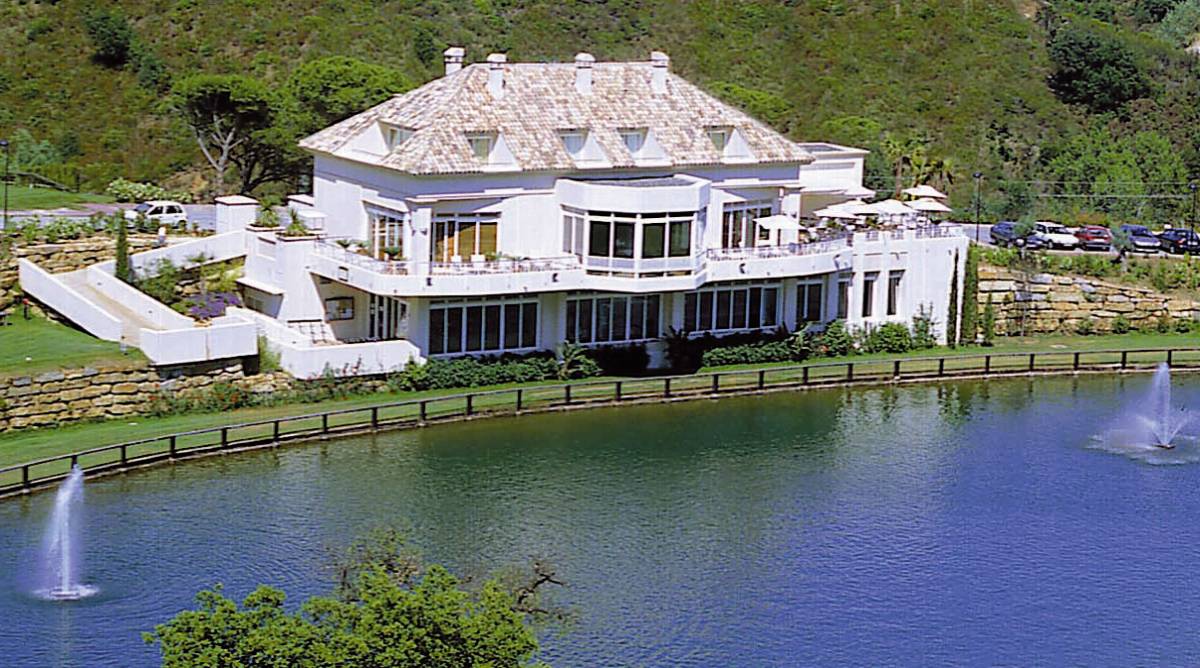 The total constructed area of buildable computable purposes is 1,200 M²

A restaurant, as a sum of pleasures must show its virtues in a whole coherence of functions and style.

The Lake is an invitation for the senses because even the details become relevant themselves. We perceive order and quality in a pleasant atmosphere where the outside surroundings are part of a staging, full of attractions for seduction.

Both natural and artificial lighting participate in creating a friendly atmosphere, because it modulates the different units seamlessly with the clarity that every spaces requires.

SYNOPSIS PROJECT BY THE ARCHITECTS IN MARBELLA:

The Lago Restaurant is a project closely linked to its environment. Designed with a traditional local architecture, with spectacular large dimension ceramic tile hip roof, crossed by large dormer windows . In front of a large lake belonging to a golf course , the relationship with water is essential . On one hand, the light reflected from the water flows through the holes in the façade, filling the inside of the building with beautiful reflections. Also at nights, restaurant lit image is projected on the water as if it were a mirror.

On the access facade to the restaurant architects have designed a small tiled roof resting on two elegant pillars marking the entrance to the enclosure. We Found on the elevation facing the lake a very open to the environment composition. Overlooking the golf course and lake , a large terrace on the first floor leads to a cozy environment surrounded by greenery . In the center a large terrace enclosed with glass woodwork and a detailed architectural design that serves as mirador.

This commercial project next to the golf course is one of a long list of successful work done by this office in the Costa del Sol. The extensive experience of the architects in this type of complex ensures the success of this restaurant in Marbella , Málaga, with excellent service in a unique setting. 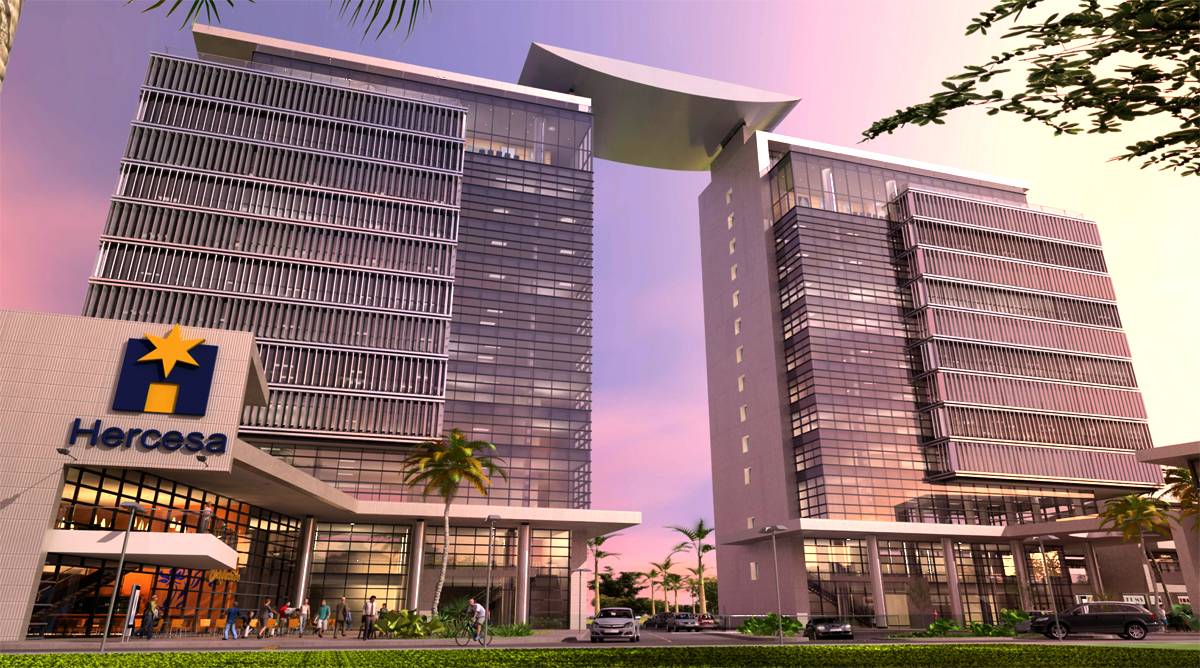 The total constructed area for buildable computable purposes is in Alternative 1 is 27,440 M² above ground and 19,000 M² in the basement.

The dilemma of this project was to define the most suitable alternative for the development of this parcel. From the beginning it was decided to make 3 different alternatives, so the client could see more clearly and well defined in a more practical and realistic way, the different possibilities we had in hand.

From the morphology of the land, It has been created a high screen that generates four interlinked elements, allowing visual permeability through them, with the same language but with different functions. On one side houses and at the other one the offices.

These elements are interconnected through a large volume of glass containing the shopping area.

The different commercial stores, strongest in aspect emerge from this large volume of glass giving a distinctive character. This large element that links the two areas could also be generated through modules which could be growing and be finishing to create this large shopping area.

In levels N0 and N1, could be the commercial and general circulation areas. In the L2 could be located offices and multipurpose rooms, conferences, etc.., Connecting at this level with the other buildings.

Propose a more linear variation in the design of buildings, play with a road near the front volume to generate an inner courtyard as a commercial center, thus allowing for a future growth on the surface of the commercial area without changing the concept from where it starts.

Two iconic and sculptural towers as a finial of a strong volumetric which comes generated as a container for housing. Unlike the previous alternatives, commercial areas would be located within the buildings, creating a large green area around the edifications.

Also like in Alternative 2, we could create a volume close to the north part of the parcel, as a container for commercial spaces.

SYNOPSIS PROJECT BY THE ARCHITECTS IN QUERETARO:

For this project in Queretaro, 3 different alternative were given, but all of them have some important characteristics in common. They are a sign of knowledge and domain of materials, as for the construction and as for represent an idea.

Architects in Queretaro present us large pieces of glass enclosures where very aesthetically edges of framework can be seen, marking the different floors of offices and homes.

They are buildings with a very contemporary look, low visual weight imaginatively topped with curved pieces, in contrast to the architecture of straight lines on which it lays.

Each proposal , despite being part of a different approach, is bold and consistent. They are the result of a detailed study by the designers, who have taken into account not only the program needs, but also the type of place, the urban look and the immediate surroundings. Based on these data, they presented in their projects the results they have obtained, giving the customer the option to decide.

This complex is located in Queretaro, Mexico. The study of architecture has previously developed projects in Mexico, in Spain, Morocco and other countries.

This experience provides them with greater skills in adapting to different cultures and building traditions, making its architecture belongs to the place where it is done. Not losing the identity of their work while they are sensitive to environment and culture where they are is very important.