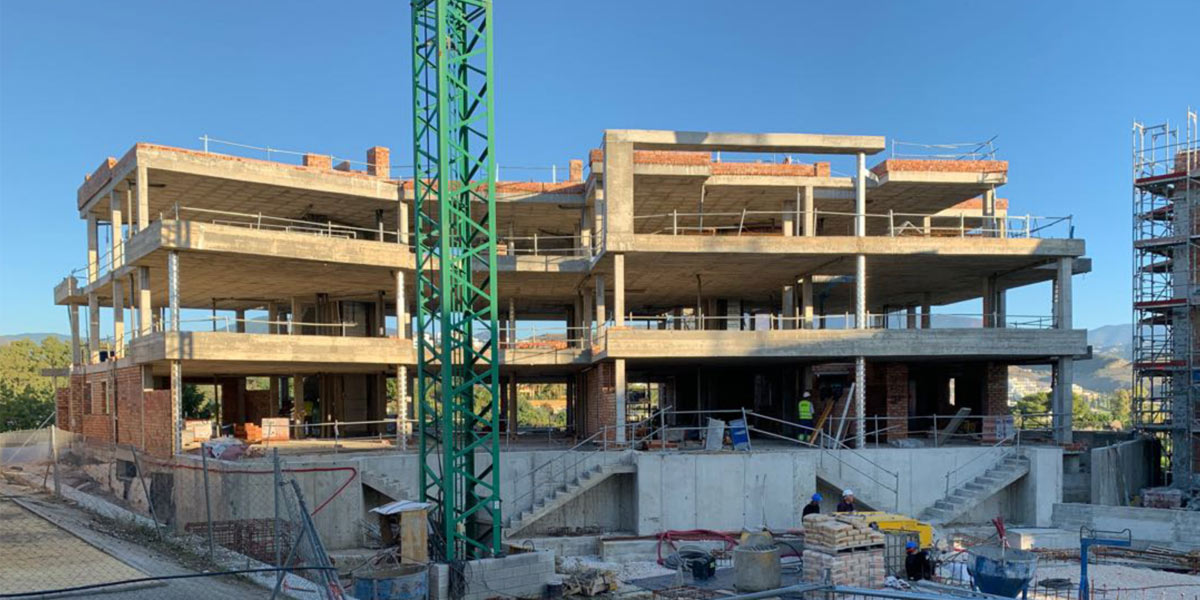 A review of The Residences another work of Gonzalez & Jacobson Architecture

A review of The Residences one project more  of González & Jacobson J Architecture.

Gonzalez & Jacobson Architecture, has designed and projected in the town of Estepona, north of Cancelada on the grounds of LA ANTIGUA “THE RESIDENCES” a contemporary residential complex of great visual and sensory experience.  A commitment to quality, using the best finishes in wood, stone, marble, glass and brushed steel.  As the year draws to a close, we take a look at its state of execution and show you the progress of the work. Percentage completed: 37.38%. 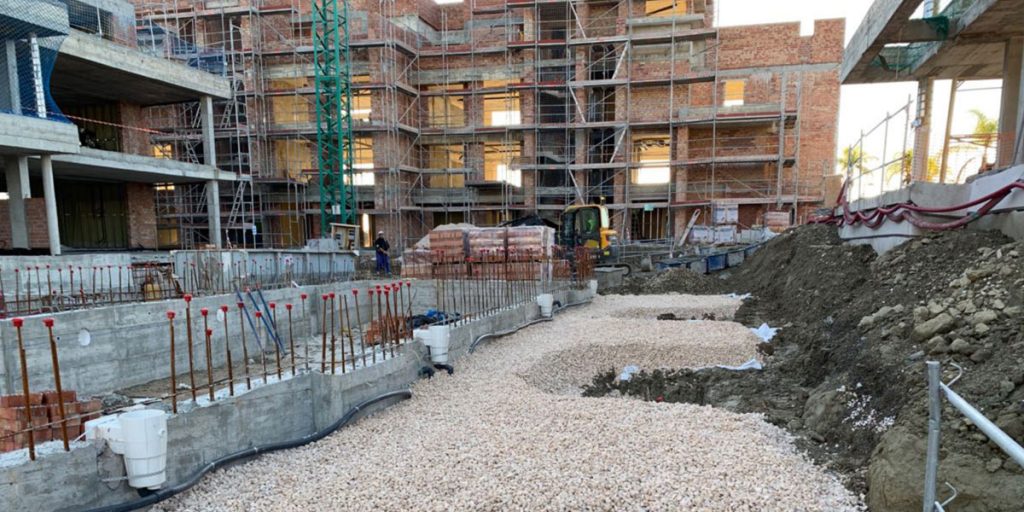 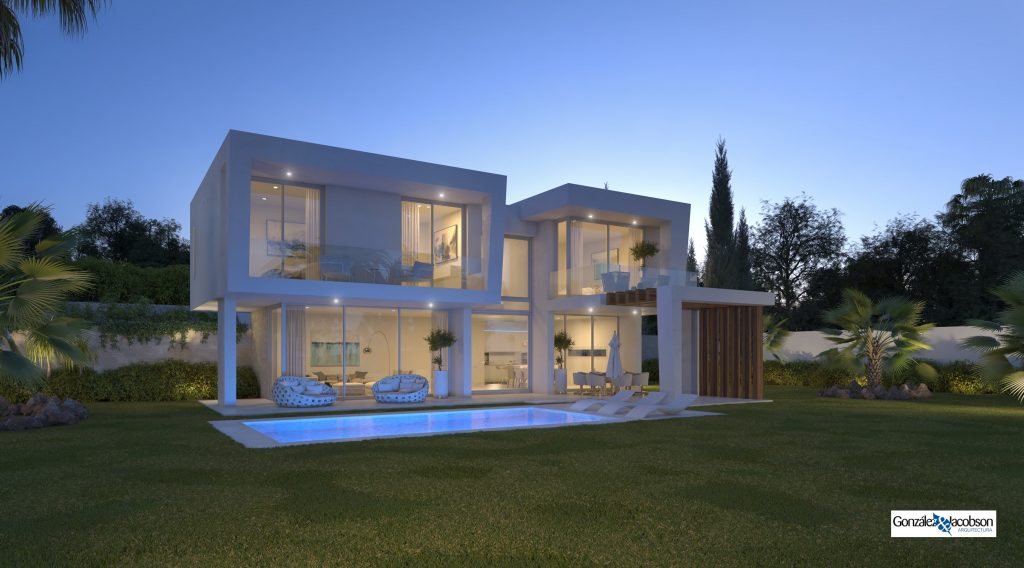 New villa within The Residences complex, designed by the González & Jacobson Architecture for Urbania.

In this case, the house is formally composed of two main volumes that are joined through a central recessed space, where the double height and glass are the protagonists.

The garden facade, facing south and west, is very open, making the most of the views. The access façade, more closed, contains the staircase, parking and service area combining wood to provide an elegant and warm touch at the same time. 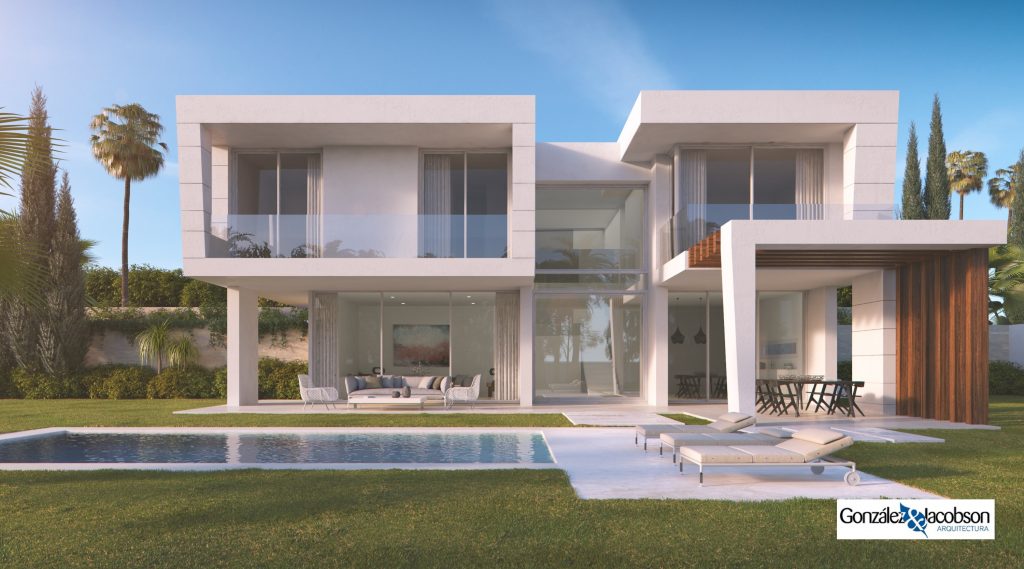 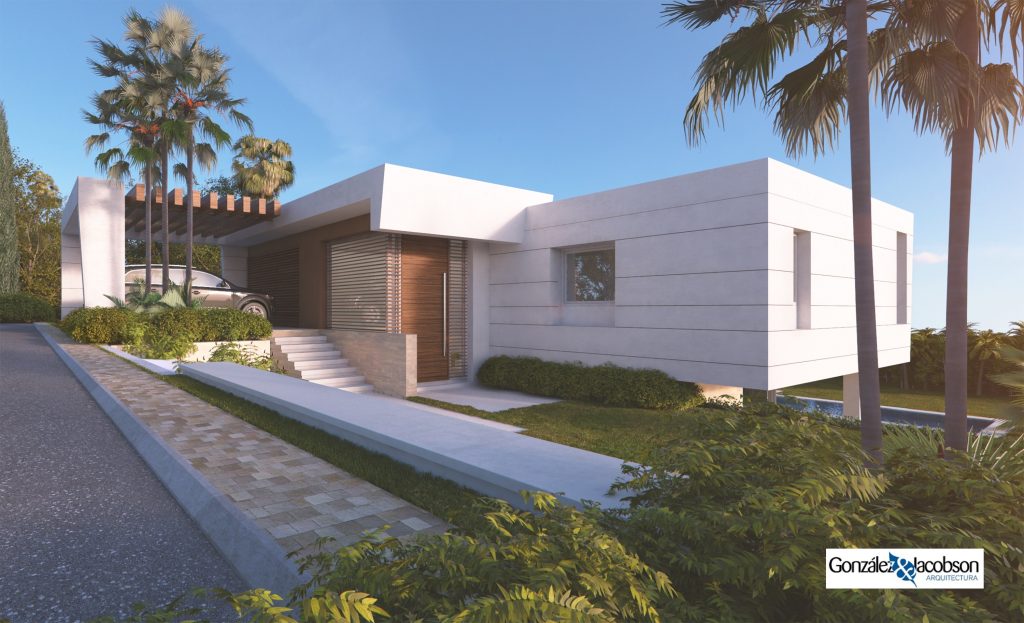 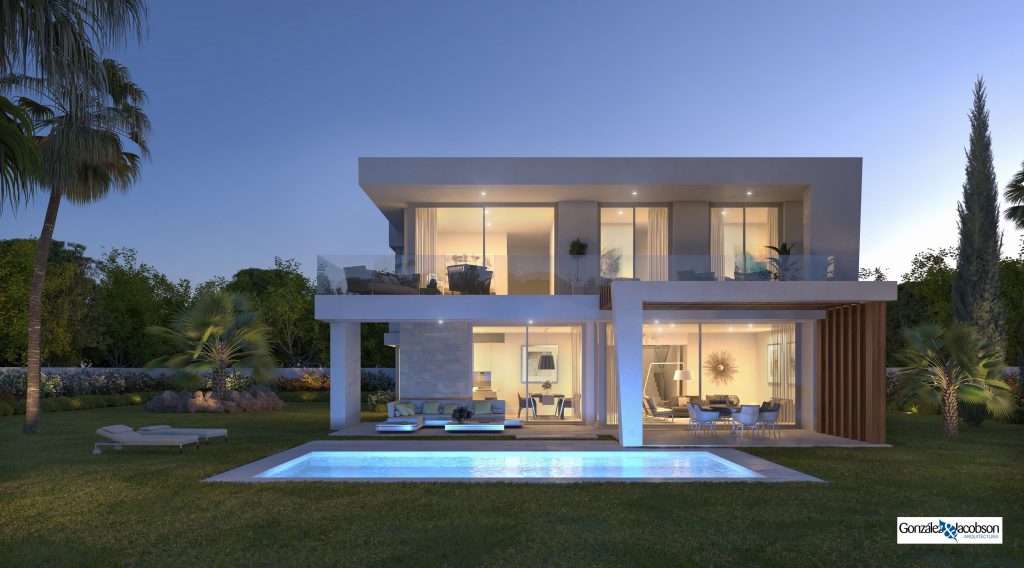 We show you one of the types of villas that González & Jacobson Architecture studio projects for Urbania, in The Residences complex.

The ground floor is very open, creating a unitary space that extends to the outside through the porch and terrace, surrounded by a large garden, whose landscaping is also in charge of González & Jacobson.

Following the design line of the first villas projected in a previous phase, the exterior image is contemporary and reflects the high level of finishes and exquisite qualities that Urbania offers its clients. 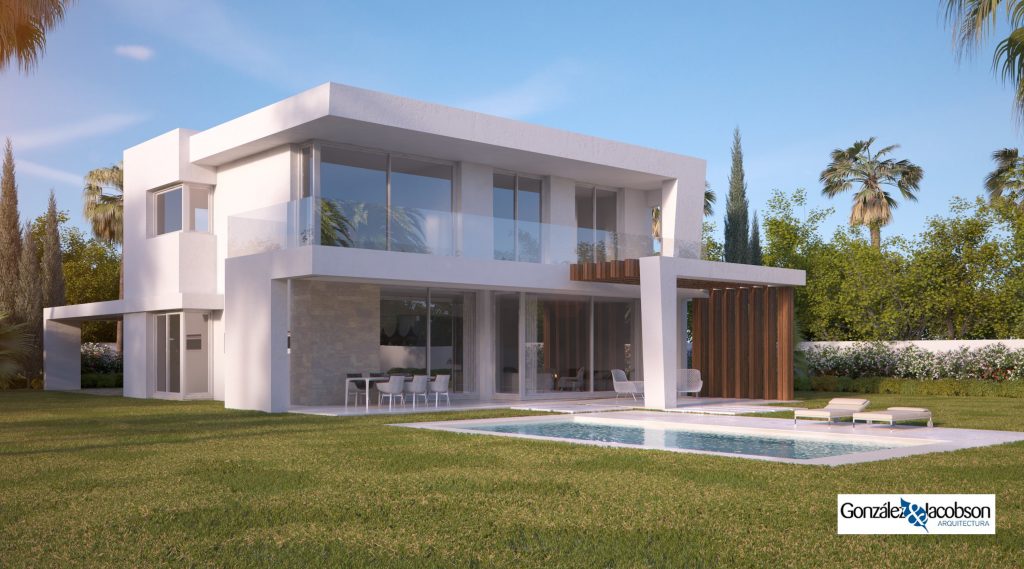 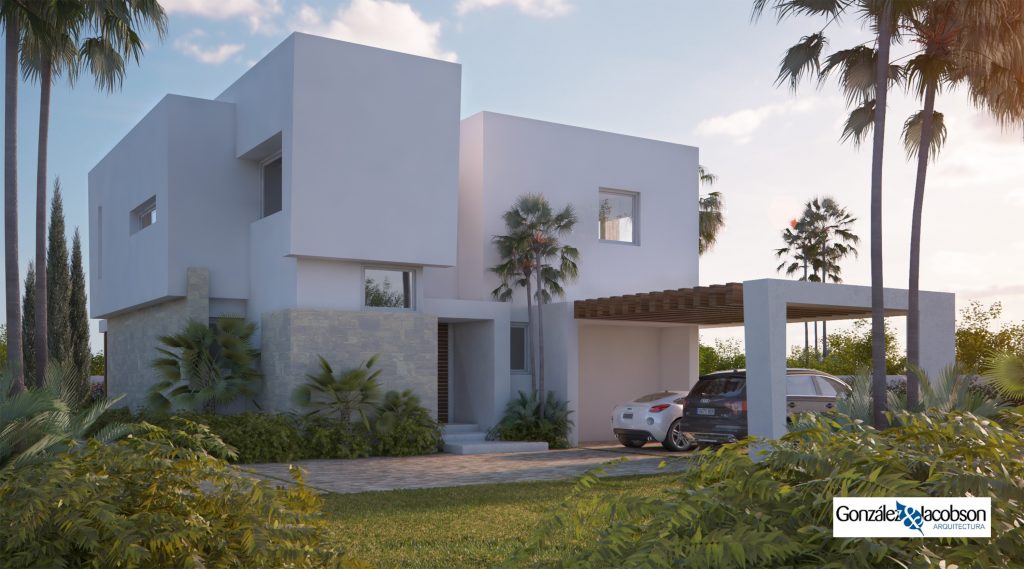 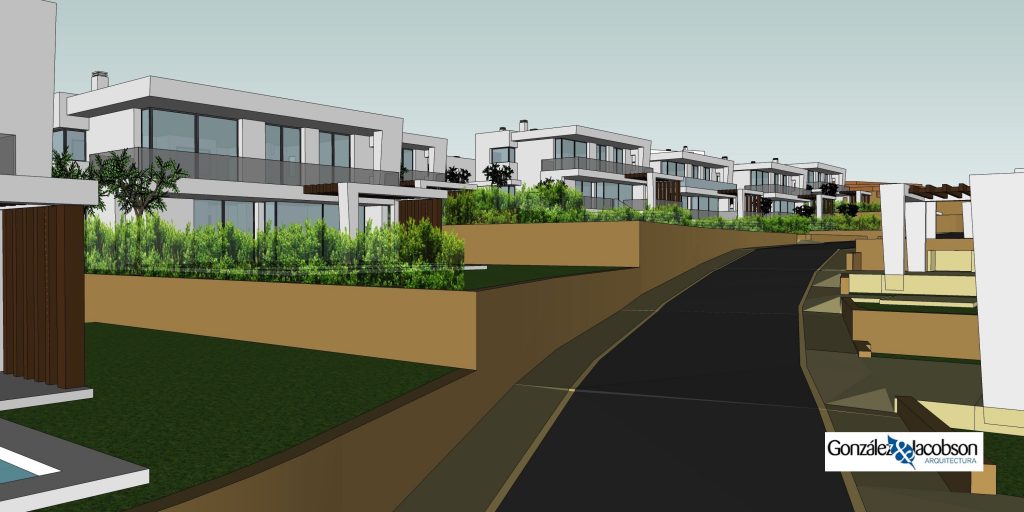 The 24 villas that make up The Residences have been basically designed in 4 different typologies, with some variants, depending on the slope of the land to which they have to adapt.
The program of requirements is very similar and is developed on two levels. Some homes, the fewest, having a basement or second level.

As for the interior distribution, the level for the daytime uses -living room, dining room and kitchen- in houses , is planned to be diaphanous, with little compartmentalization and extended to the exterior through the porches. The bedroom level has 3 or 4 bedrooms, depending on the type of house. The master bedroom always has an en suite bathroom and dressing room.

The built surface areas range from 240 m2 to 420 m2 (the largest in those units with a basement), to which must be added the large porches, with an average of 68 m2 per villa, and open terraces and pergolas. 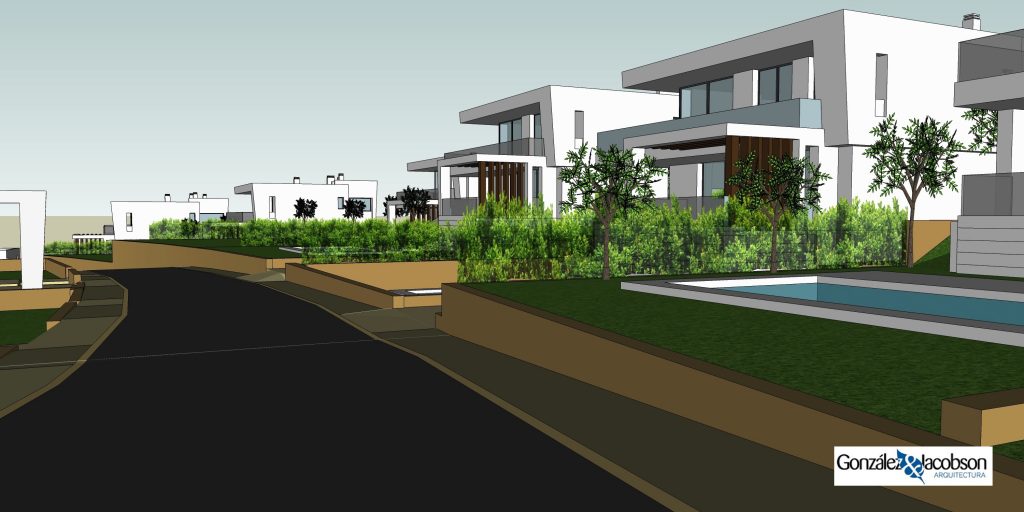 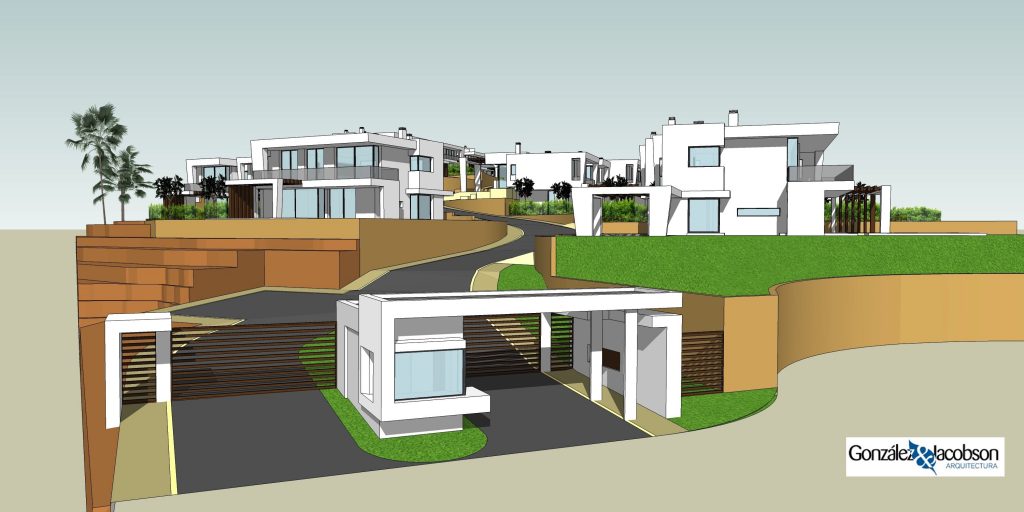 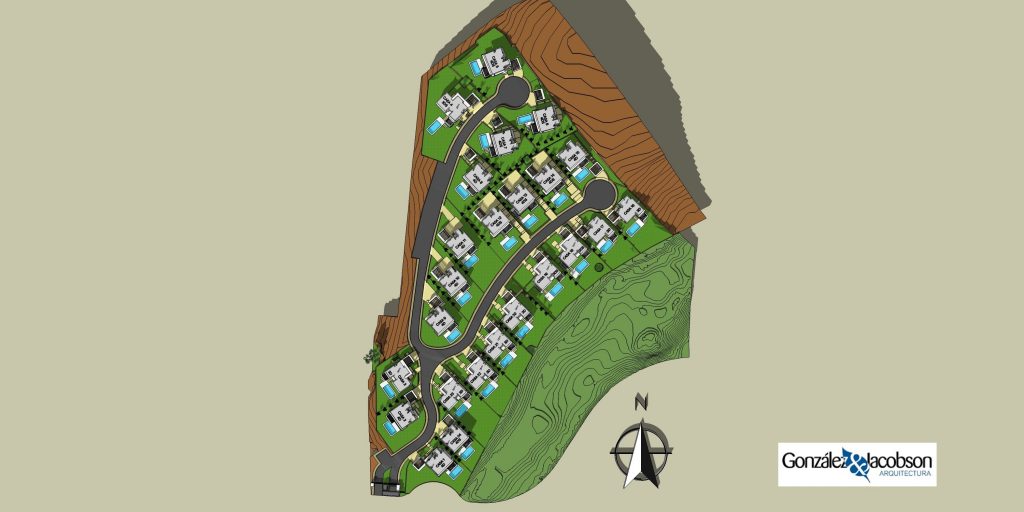 ICON THE RESIDENCES (I)

This new project is developed on a plot classified according to the current planning as Singular Ordination, having previously been necessary to process the license a Detail Study that defines the ordering of volumes of the complex. The floor area exceeds 28,000 m2, reaching the buildable area of almost 10,000 m2.

24 villas are envisaged (a density much lower than that allowed by the PGOU, whose maximum is 46 units) on sub-plots whose surfaces range between 576 m2 the smallest and 1,286 m2 the largest, with the majority having more than 800 m2 of ground. The complex is developed under a horizontal property regime on a single plot that has an interior “Y” road that gives access to all the homes, more than 3,400 m2 of common green area and control booth.

The situation of the plot, surrounded by green areas and the golf course of the urbanization, as well as its average slope of 11%, represent an opportunity for the Gonzalez & amp; Jacobson Architets when undertaking the design, resolving the location of each of the villas in order to optimize the views of both the sea (just 2,000 m in a straight line) and the golf that surrounds them. 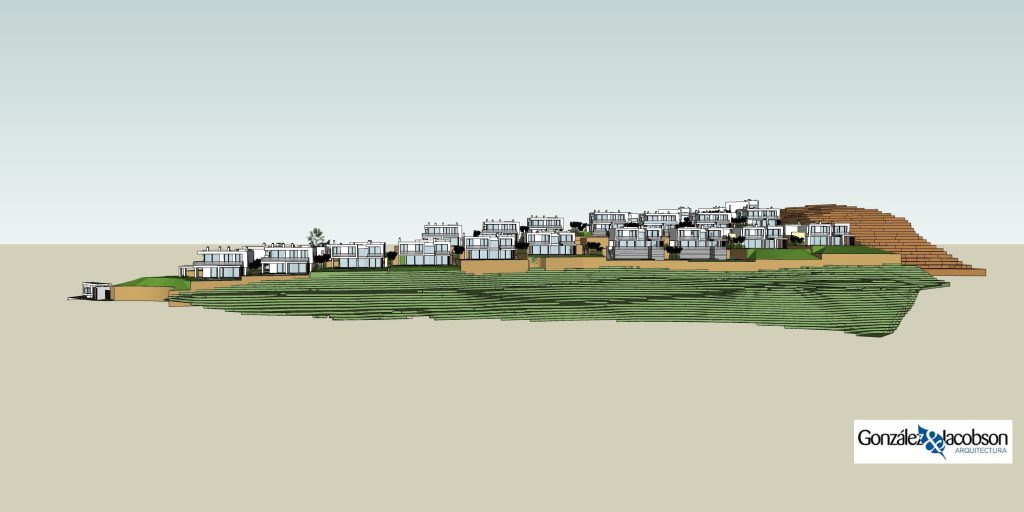